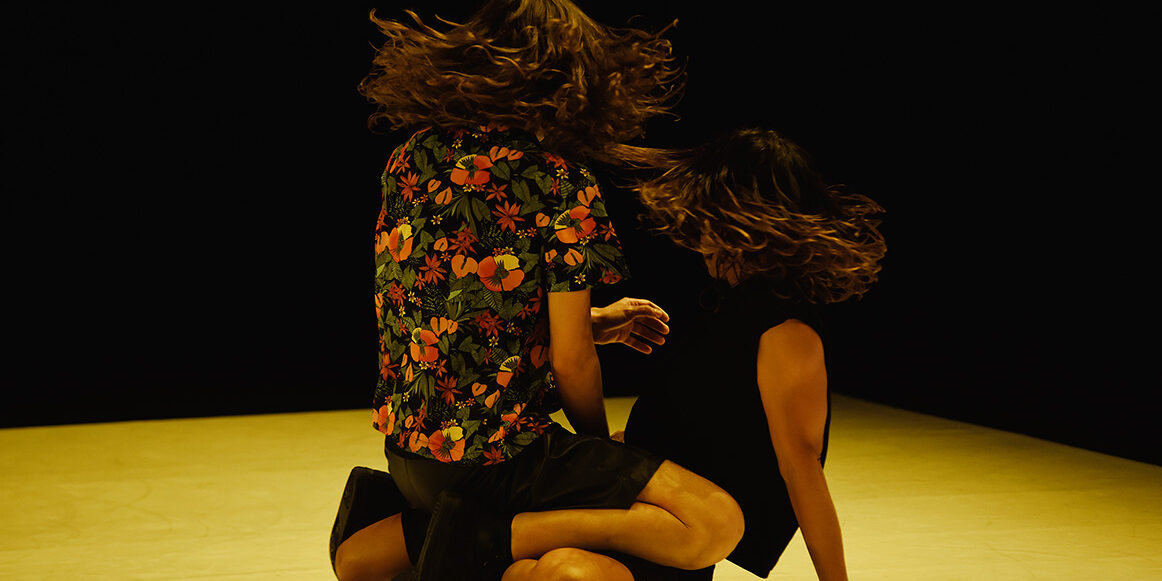 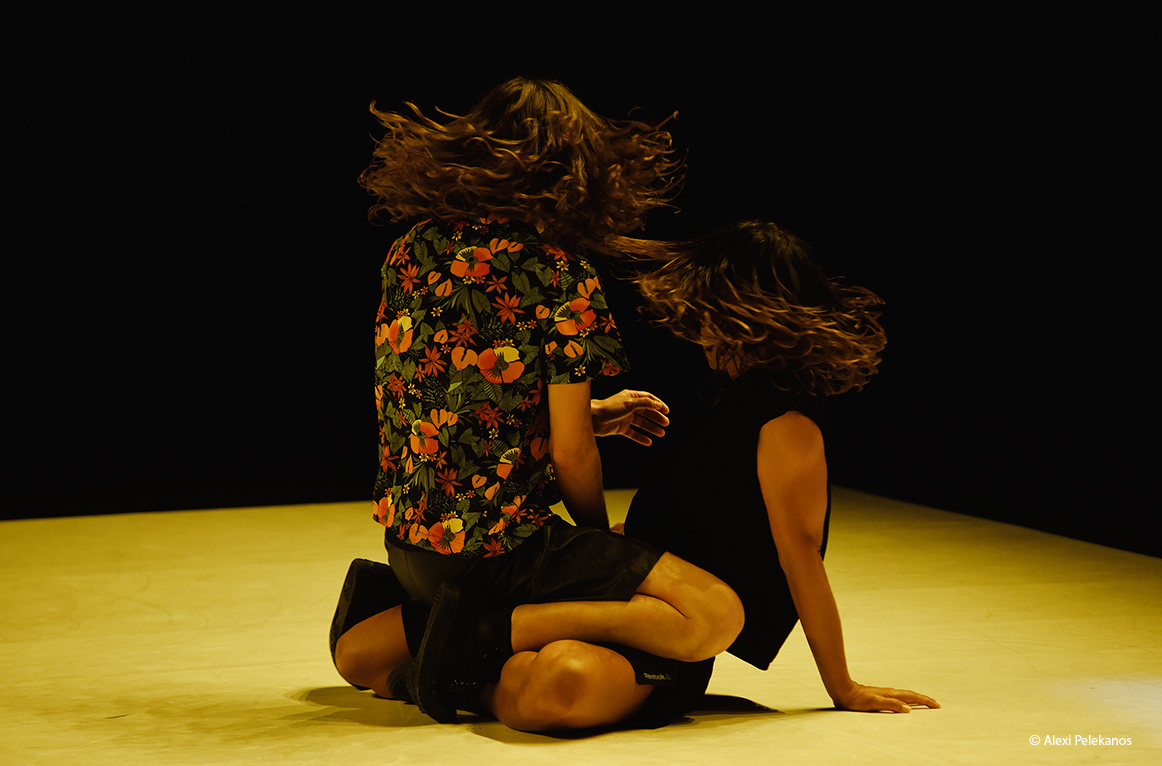 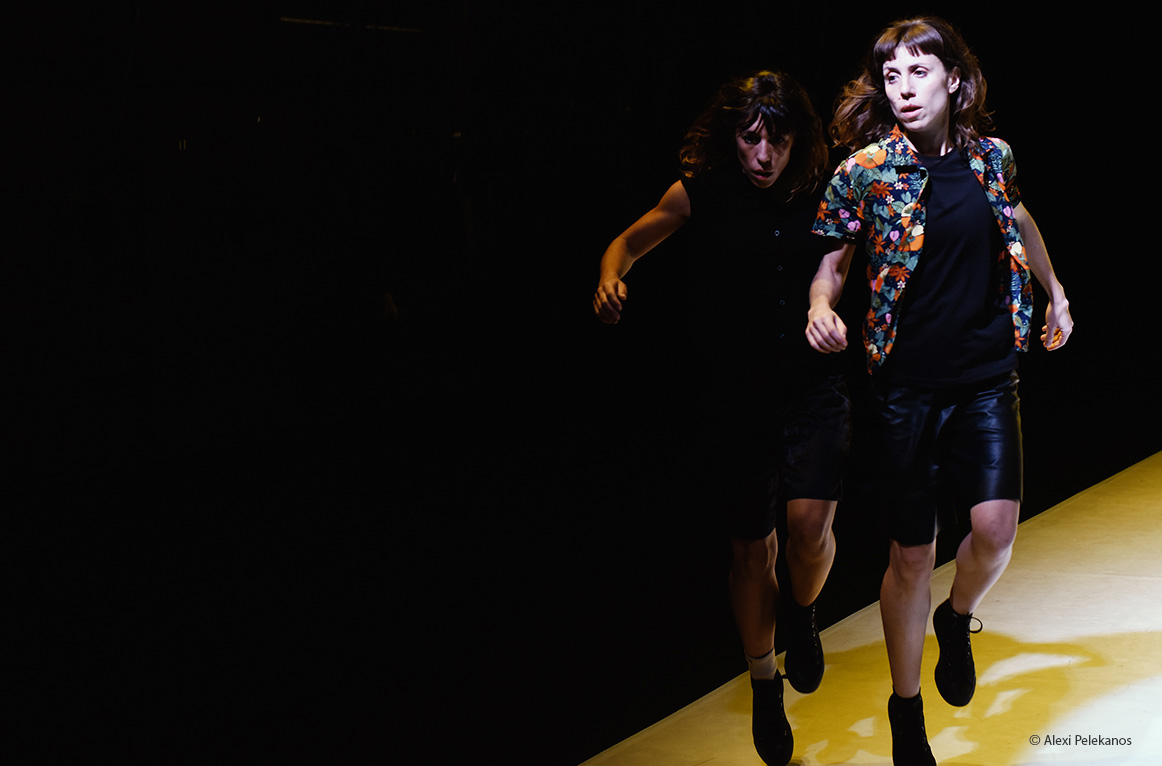 Zeppelin Bend, named after the end-to-end joining knot used to moor airships, is a duo. Katerina Andreou and Natali Mandila put together dances, actions, and sounds that demand hard discipline and psychedelic imagination. In a world where staying ‘grounded’ or getting ‘high’ are often considered survival methods, they try both. While seeking moments of freedom, they strive to stay real by focusing on their bodies while in action.

In her ongoing research on free will on stage and its subjective nature, Katerina Andreou explores different body practices and approaches new skills as if they were new technologies. She keeps learning in order to keep unlearning. Along with this saturation of rigor and discipline comes a desire to tackle matters such as control and power structures. In sorting this knowledge, she constructs her own personal culture: which training is best for which performance, which effort for which goal?

Born in Athens in 1982 and based in France, Katerina Andreou is a dancer, musician, and choreographer. A graduate of the University of Athens Law School and the National School of Dance (Athens). She attended the ESSAIS programme of the CNDC d’Angers (2011), under the direction of Emmanuelle Huyhn, with a scholarship from the K. Pratsika Foundation, and holds a Masters degree in dance studies and choreography from Université Paris 8. She was a Danceweb scholar in the Impulstanz Festival in Vienna in 2015. As a dancer she collaborated with DD Dorvillier, Lenio Kaklea, Bryan Campbell, Dinis Machado, Emmanuelle Huynh, and Ana Rita Teodoro, among others. In her work, Andreou is interested in developing states of presence by constantly negotiating between contrasted tasks, fictions, and universes, often questioning her relation to notions such as authority and autonomy, communication and censorship. She often designs the music for her own pieces. Andreou was awarded the Prix Jardin d’Europe choreography prize at the ImpulsTanz Festival in 2016 for her solo dance piece A Kind Of Fierce, a co-production of Festival of Athens. She subsequently created the solo BSTRD (2018) and the duo Zeppelin Bend (2021) with Natali Mandila.

Natali Mandila was born and is based in Athens. In 2004, after completing her academic studies on Information Science at the Ionian University, she focused on dance and graduated from State School of Dance in Athens in 2010. Since then, driven by the need to constantly reeducate herself, she continued to attend workshops on various body practices both in Greece and abroad. She is currently studying Perceptual Psychoeducation at the Pessoa University in Athens. As a teacher, performer, and creator she collaborated with Garage Performing Arts Center, and as a performer with Greek artists, including choreographer Eva Randou, director and animator Giorgos Nicopoulos, and music producer and creator Andras Monopolis. As part of the GPAC residency programme in 2016, she created her first choreographic work consisting of two pieces with the general title Feral, presented at the Garage Performing Arts Center, REBORN in Athens Festival, Arc for Dance Festival, and Vida Laska Arts Festival Corfu.