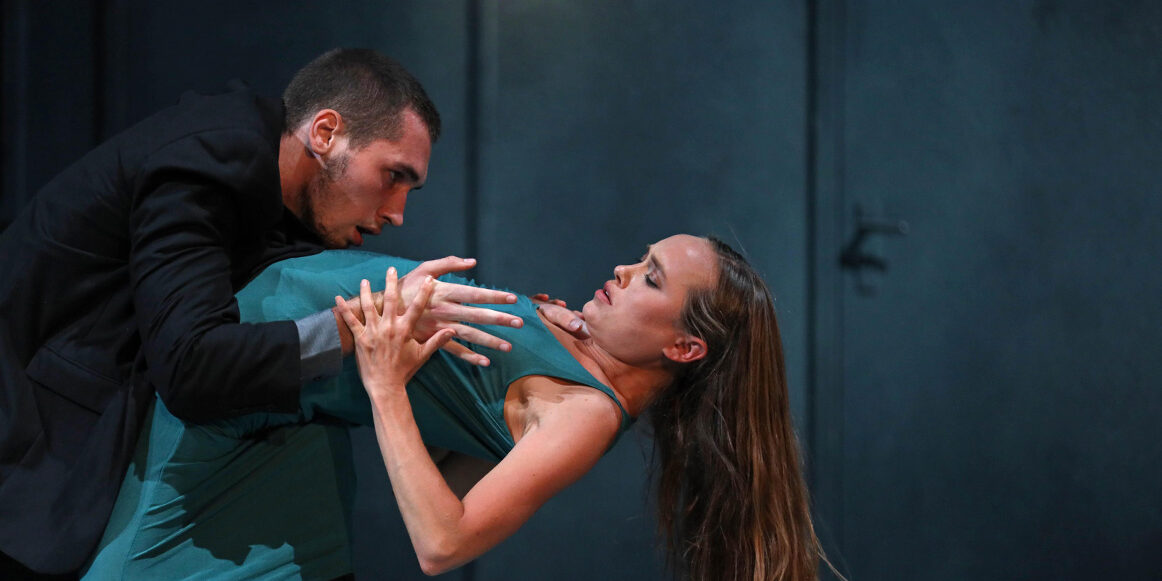 TRIPTYCH: THE MISSING DOOR, THE LOST ROOM AND THE HIDDEN FLOOR 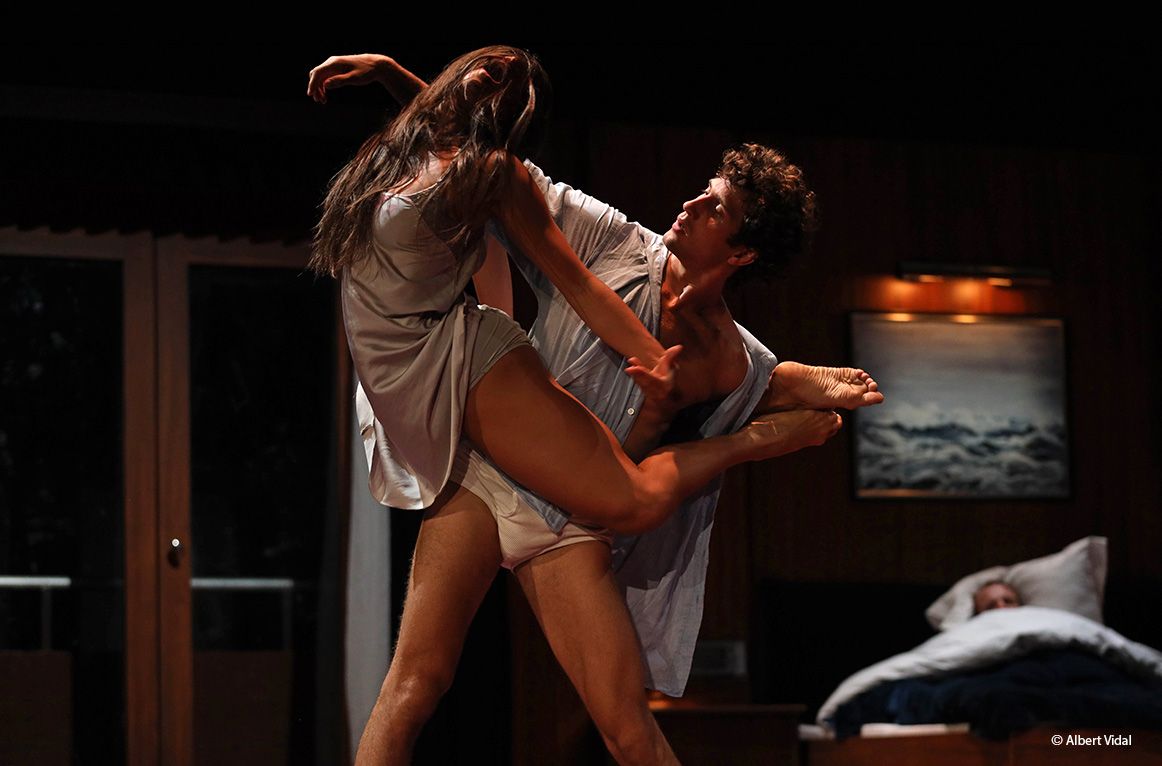 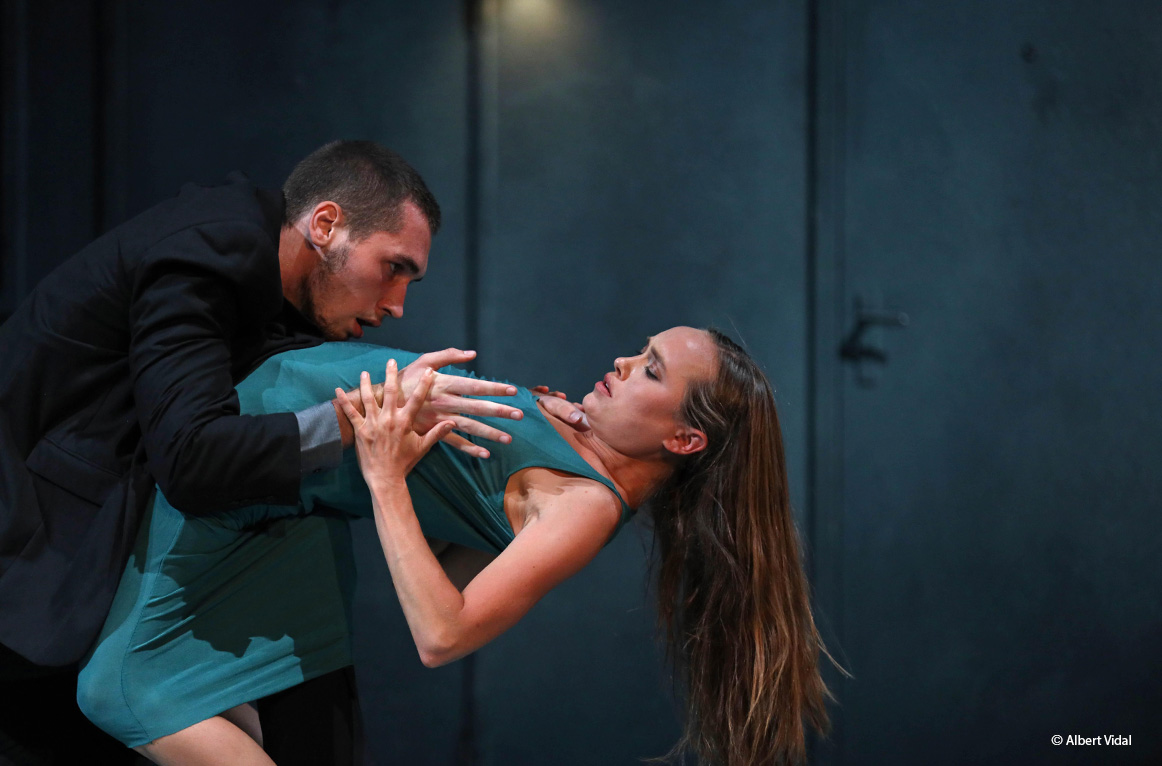 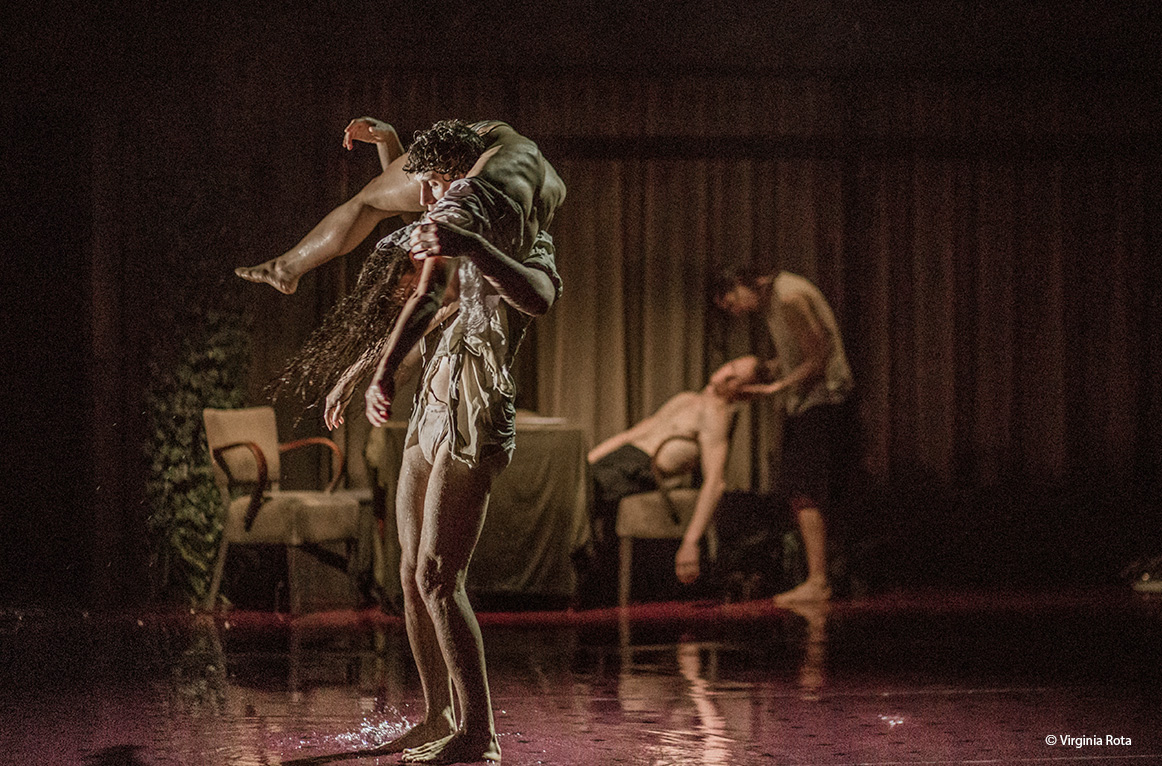 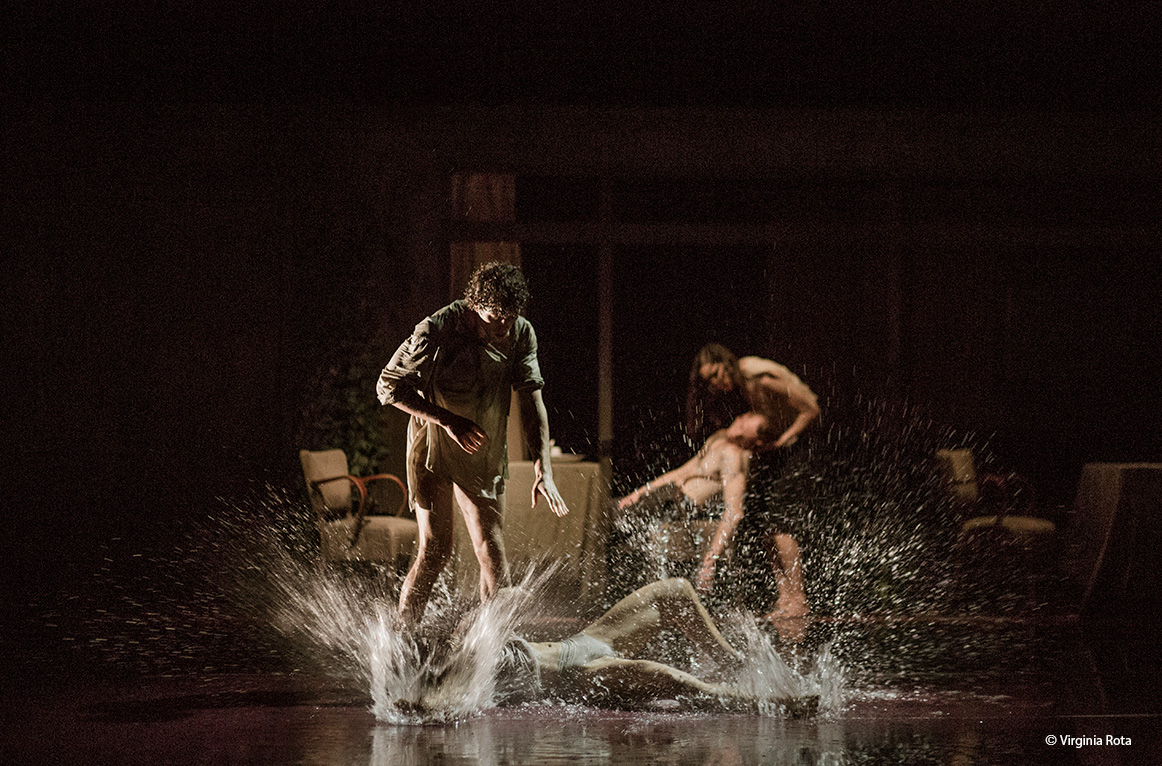 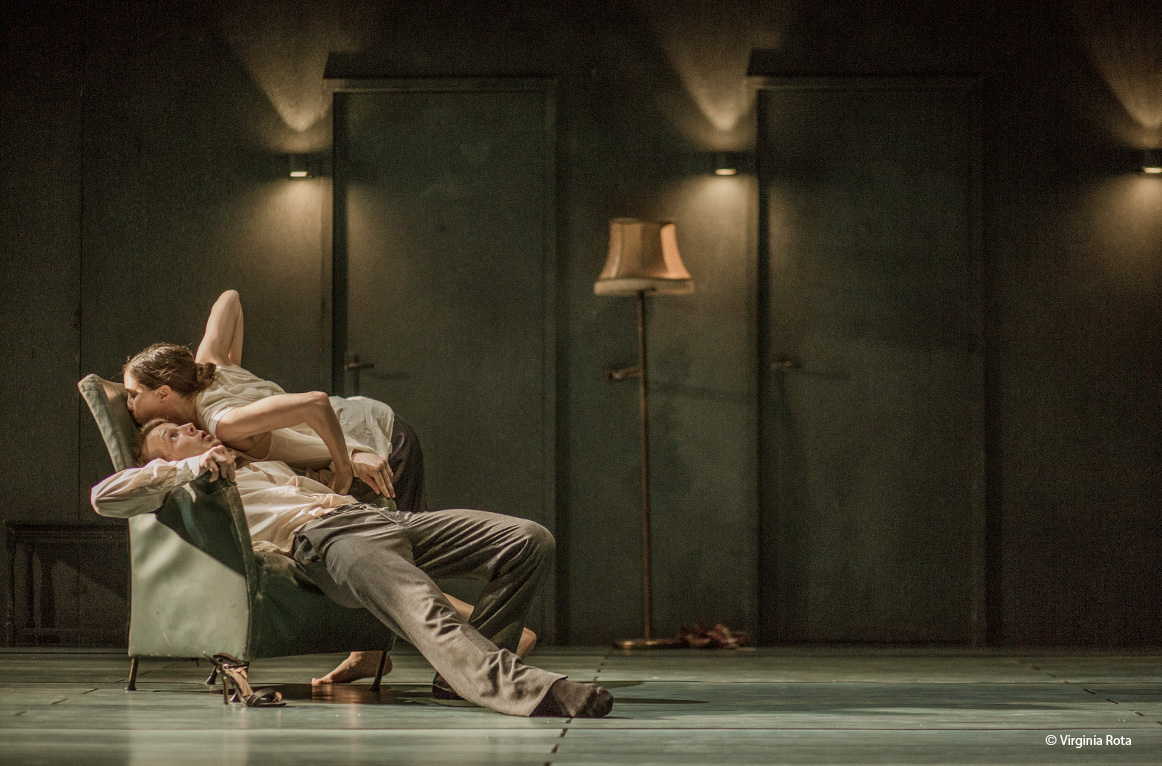 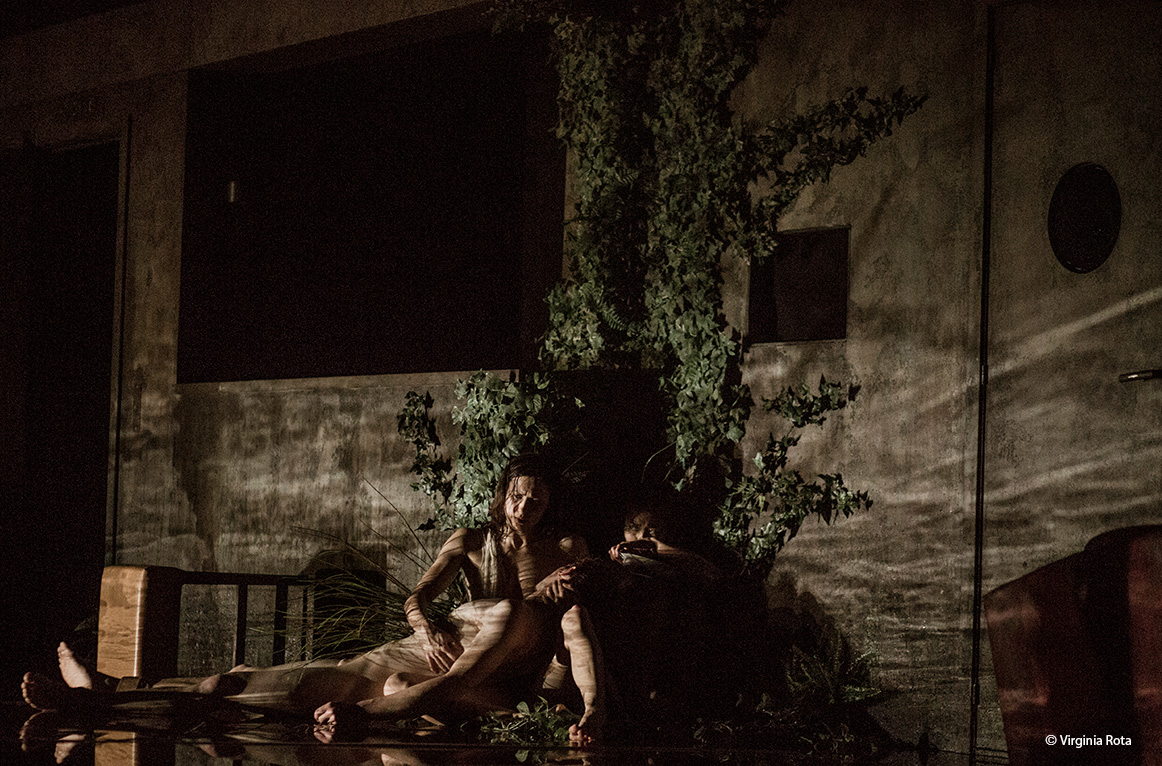 In the Triptych trilogy, the characters, lost in time and space, are continually drifting away and searching for one another, revealing a melancholy nostalgia for the future. A triple huis-clos in which the characters try in vain to create a new version of their illusory reality.

Gabriela Carrizo and Franck Chartier experimented with changing filmic sets from one scene to the next in order to get the transitions to unfold as an autonomous dramaturgical force. In Triptych, this intermediary dramaturgy is an intimate part of the maze-like wanderings into the past and the future.

Triptych is a reworked version of three short pieces that Peeping Tom created for the Nederlands Dans Theater. Gabriela Carrizo directed the first part, The Missing Door, while Franck Chartier directed the two installments that followed, The Lost Room and The Hidden Floor. Carrizo and Chartier wanted to bring these pieces into the Peeping Tom repertory to be able to continue performing them. Together, the choreographers reimagined the pieces for the dancers of their company. In that sense, Triptych shows how different bodies, idioms, and working methods can not only overlap, but also mutually nourish one another.

Carrizo and Chartier focused on creating a new team of performers with a distinctive combination of technical qualities, which straddle both dance and theater. With their own physical vocabulary, the new dancers will trace new lines of memory, not only across Triptych, but across the company as well.

With the support of the Flemish authorities.

Triptych: The missing door, The lost room, The hidden floor was created with the support of the Tax Shelter of the Belgian Federal Government.

Peeping Tom is a Belgian dance theatre company, founded by Gabriela Carrizo (I/AR) and Franck Chartier (F). Peeping Tom’s hallmark is a hyperrealist aesthetic anchored to a concrete set: The space initially feels familiar — the creators then break open this realism and begin to defy the logic of time and space. Through a rich imagery, the viewer is taken into an unconscious world of nightmares, fears and desires, which the creators deftly use to shed light on the dark side of a character or a community. They explore an extreme language of movement and performance: Nothing is ever gratuitous, and the human condition is throughout a main source of inspiration. Since its foundation in 2000 in Brussels, Peeping Tom has presented its creations around the world. The company has received several important awards, including an Olivier Award in the United Kingdom for 32 rue Vandenbranden, a Patrons Circle Award at the International Arts Festival in Melbourne as well as several selections for the Belgian and Dutch Theatre Festivals. In Peeping Tom, everything connects to everything else. The organic and the intuitive are the breeding ground for collaborations and for creation processes. Their work is a collective and continuous research, coupled with long-term relations with creative and unique performers that ensure the continuity of form and content. Over the years, the company has developed a strong relation with theatres and audiences. The performances attract a wide, faithful, mostly young public, both at home and abroad. The list of tour dates is exceptionally long, as is the – growing – number of countries they visit each year. With Peeping Tom, creation periods tend to be long, and the productions grow and ripen during the tours. This means that on average, there is a new production every two years. Peeping Tom’s offices are situated in Molenbeek (Brussels). The company benefits from structural support from the Flemish authorities.

Franck Chartier (Roanne, France, 1967) started dancing when he was eleven, and at the age of fifteen his mother sent him to study classical ballet at Rosella Hightower in Cannes. Between 1986 and 1989, he was part of Maurice Béjart’s Ballet du 20ème Siècle. The following three years, he worked with Angelin Preljocaj, dancing in Le spectre de la rose at the Opéra de Paris. He moved to Brussels in 1994, to perform in Rosas’ production Kinok (1994), and he stayed on, working on duos with Ine Wichterich and Anne Mouselet, as well as in productions by Needcompany (Tres, 1995) and Les Ballets C de la B: La Tristeza Complice (1997), Iets op Bach (1997) and Wolf (2002). In 2013, he created 33 rue Vandenbranden for the Göteborg Opera, based on Peeping Tom’s 32 rue Vandenbranden, and he developed the choreography for the opera Marouf, Savetier du Caire by Jerôme Deschamps at the Opéra Comique de Paris. For the Nederlands Dans Theater, he directed The lost room in 2015, for which he received the prestigious Dutch prize ‘Swan Most Impressive Dance Production 2016’. 2017 marked the world premiere of The hidden floor, his second collaboration with the Dutch company. More recently, he worked with Gabriela Carrizo on 31 Rue Vandenbranden (2018), an adaptation with Le Ballet de l’Opéra de Lyon of Peeping Tom’s original. The new piece opened the prestigious Biennale de la Danse de Lyon in 2018. In 2021, he directed Dido & Aeneas, a collaboration between Peeping Tom, Le Concert d’Astrée and the Grand Théâtre de Genève. In 2022, he directed Oiwa, a duet created with and for the Ballet National de Marseille. Franck has been the artistic director of Peeping Tom, along with Gabriela Carrizo, since they co-founded the company in 2000.

Gabriela Carrizo (Córdoba, AR, 1970) was ten years old when she started dancing at a multidisciplinary school that had, at the time, the only group of contemporary dance for children and teenagers. Under Norma Raimondi’s direction, the school went on to become Córdoba’s University Ballet, where Gabriela danced for a couple of years, and where she created her first choreographies. She moved to Europe when she was nineteen, and over the years she worked with Caroline Marcadé, Les Ballets C de la B (La Tristeza Complice, 1997, and Iets op Bach, 1998), Koen Augustijnen (Portrait intérieur, 1994) and Needcompany (Images of Affection, 2001). She never stopped working on her own choreographies, and these years saw the production of a solo piece, E tutto sará d’ombra e di caline, and Bartime, a collaboration with Einat Tuchman and Lisi Estaras. She also created the choreography for the opera Wolf (2002), by Les Ballets C de la B. She plays a leading role in Fien Troch’s movie Kid (2012), and in 2013 she created the short piece The missing door (2013) for the Nederlands Dans Theater – NDT 1 in The Hague. In 2015, Carrizo created The Land, a collaboration with the Munich Residenztheater. More recently, she worked with Franck Chartier on 31 Rue Vandenbranden (2018) an adaptation with Le Ballet de l’Opéra de Lyon of Peeping Tom’s original. The new piece opened the prestigious Biennale de la Danse de Lyon in 2018. In 2022, Gabriela directed La Ruta, her second short piece for the Nederlands Dans Theater (NDT 1). Gabriela has been the artistic director of Peeping Tom, along with Franck Chartier, since they co-founded the company in 2000.