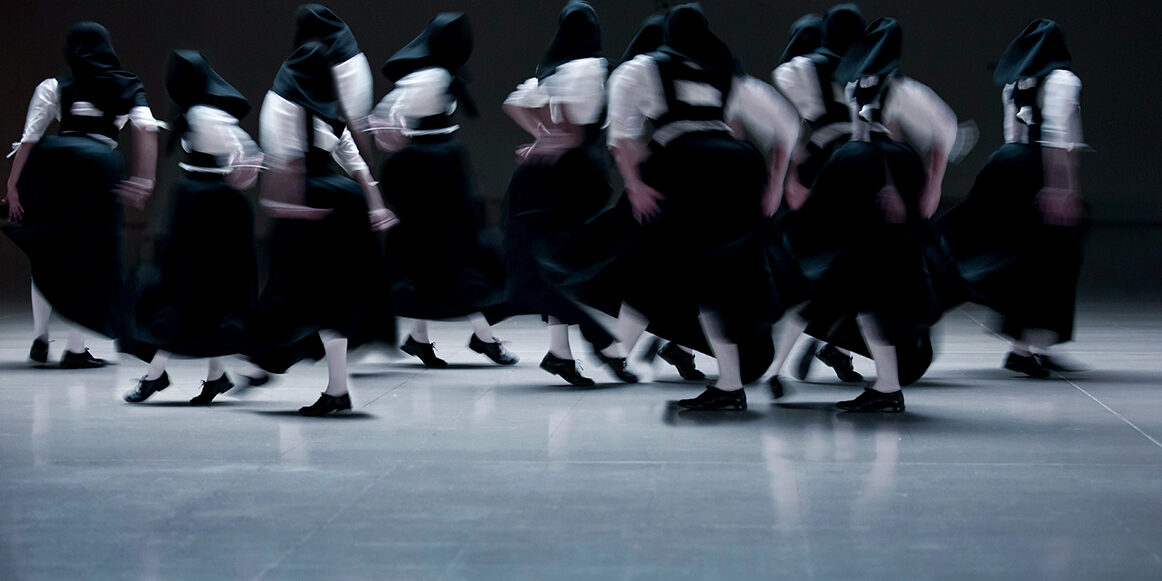 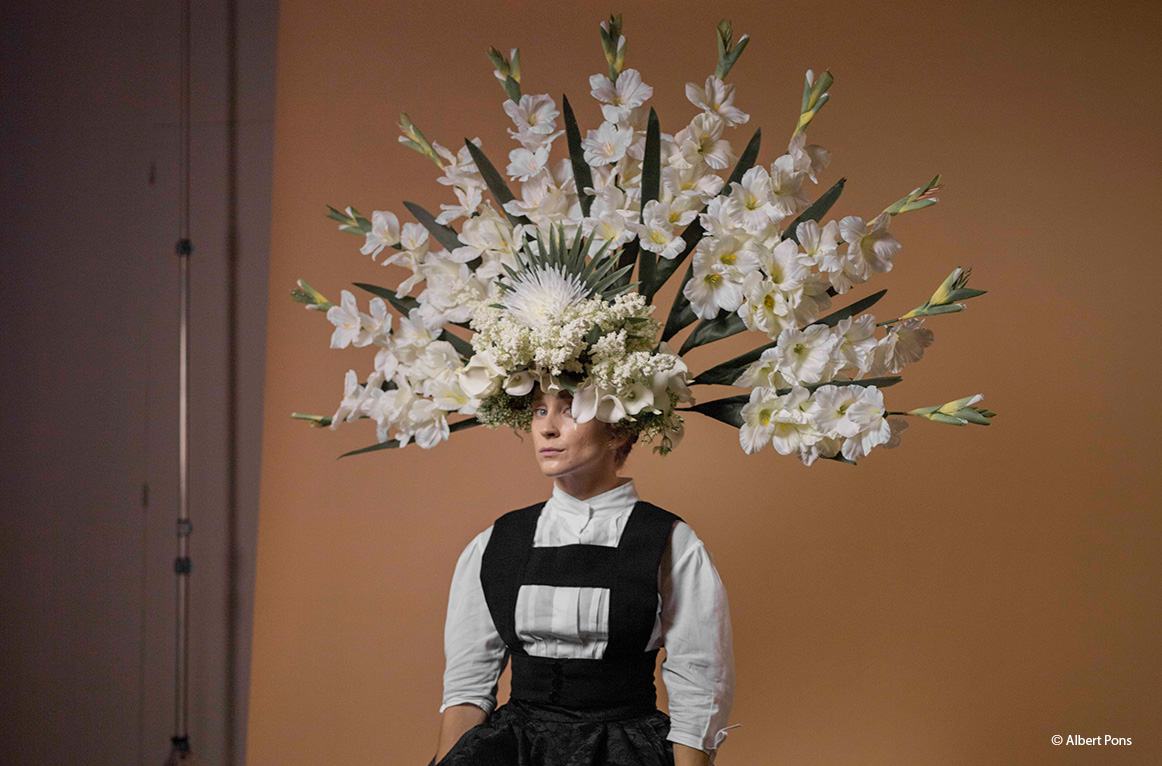 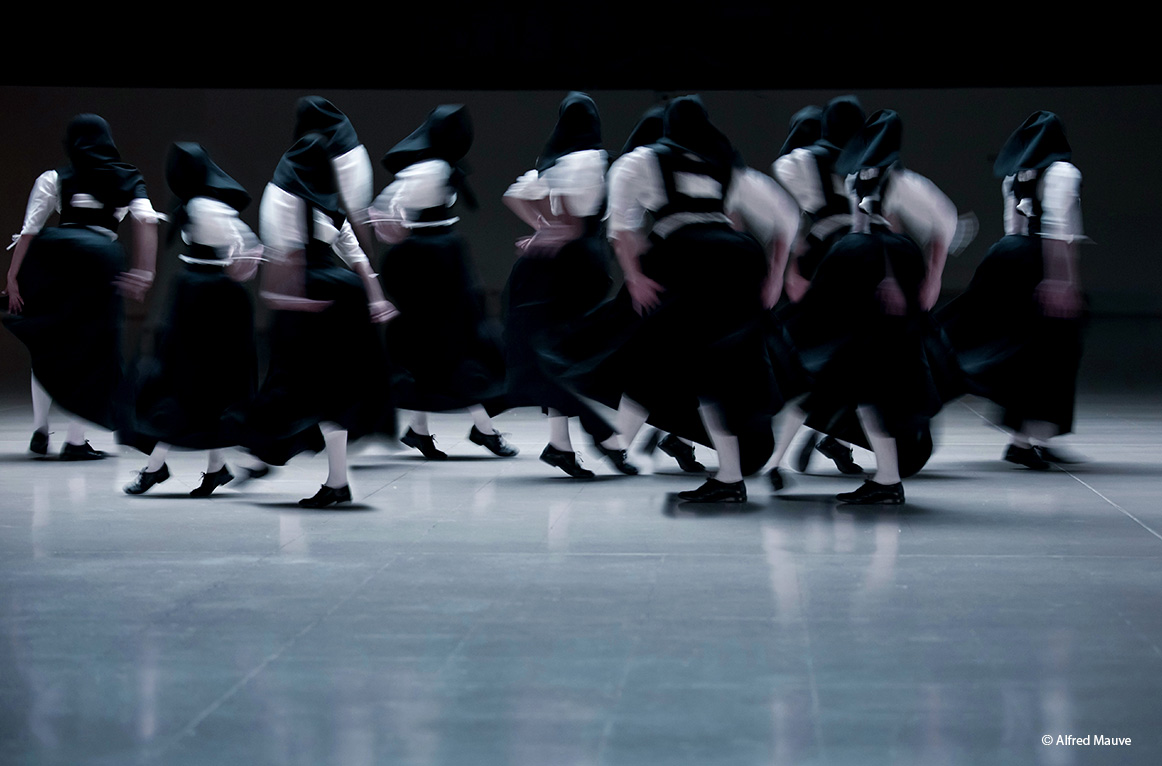 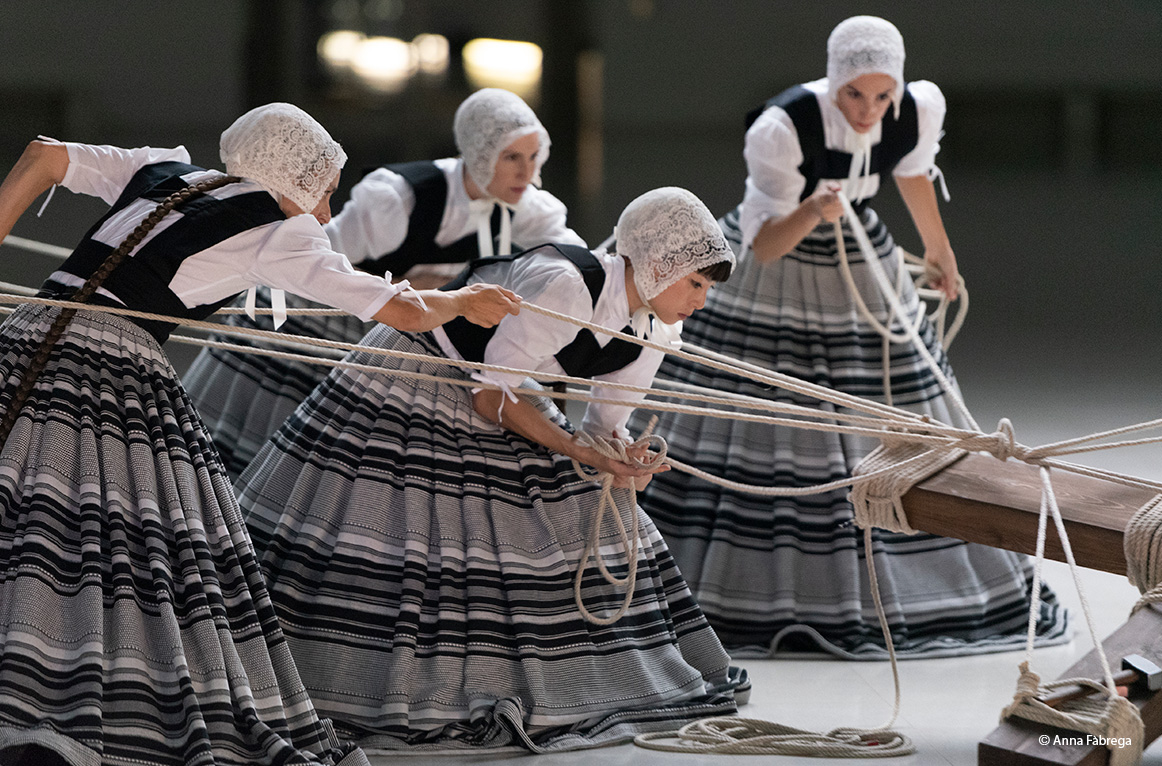 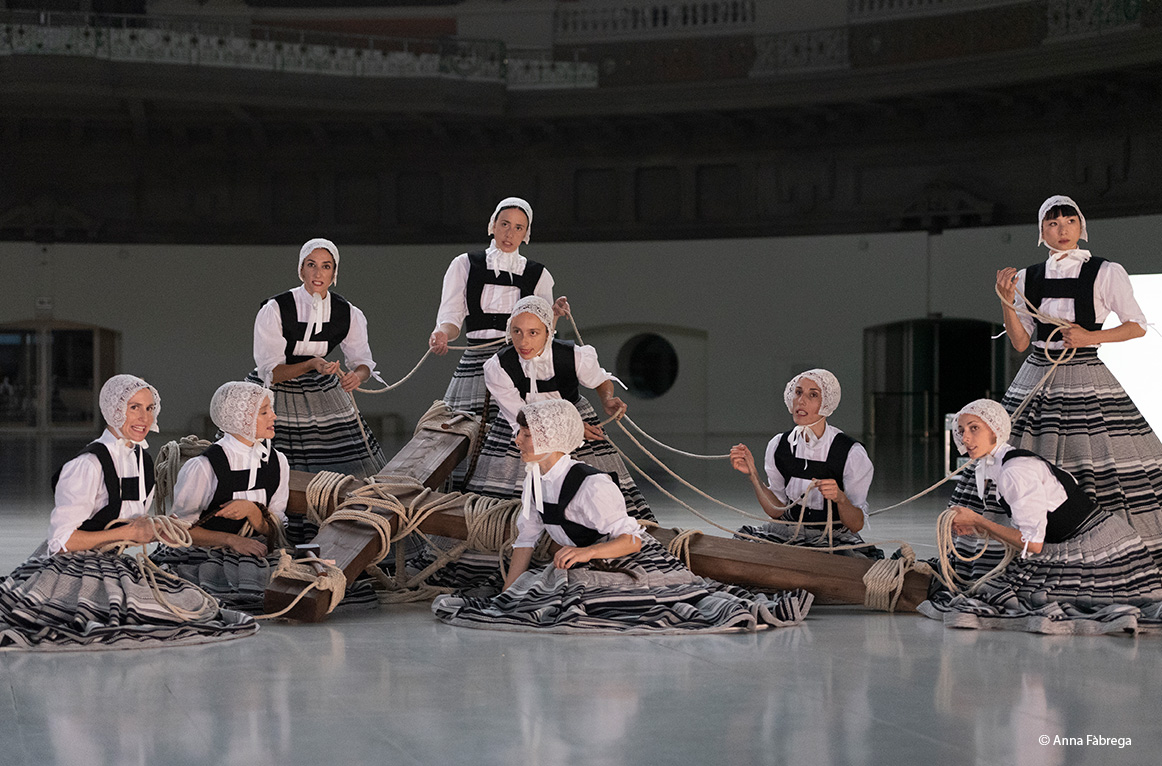 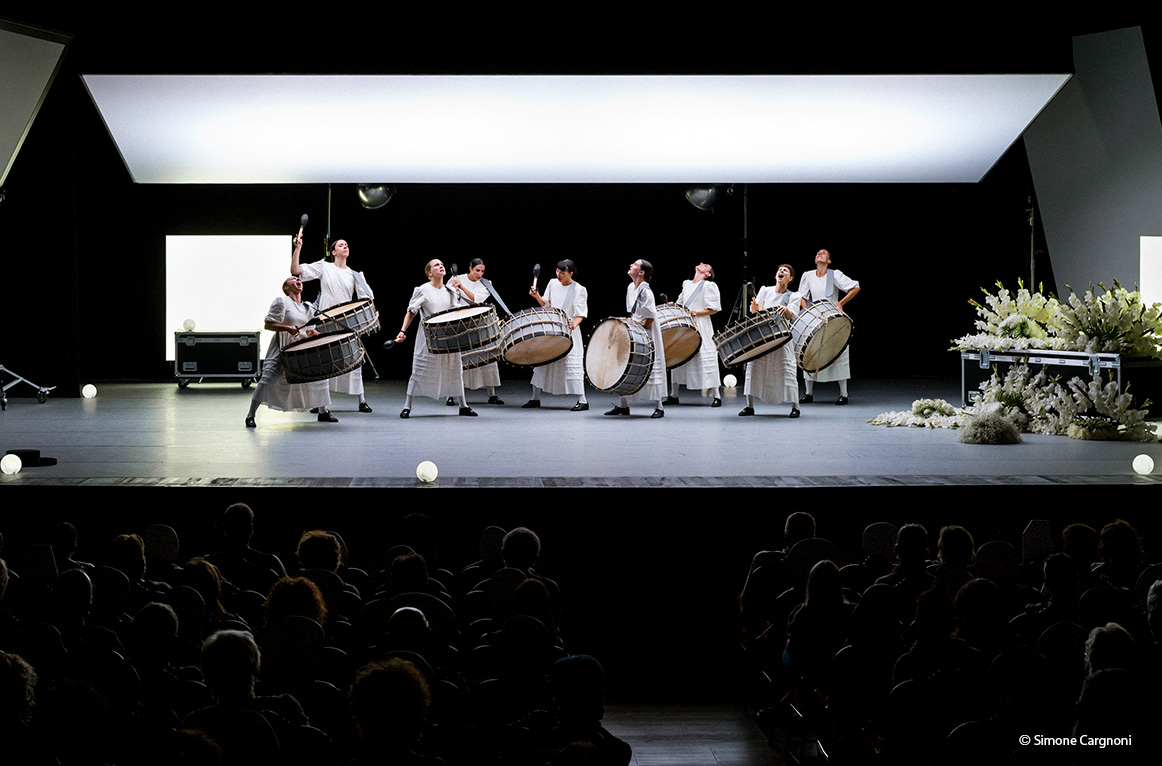 Imagine that reality is not enough; you run out of its shapes, its rigidity crushes you and its limits corner you. And one day a light begins to emerge within you, a murmur, a language that you still do not understand but that tries hard to be heard. Imagine that other voices, other noises, are added to that voice, and that they grow intensely until they become screams, shrieks, a loud racket, an endless storm.

Sonoma is that place where the storm originates, where the drums continue to beat with a force that shakes the earth and opens a deep crack in the ground under our feet.

Sonoma begins with a scream and ends with a loud racket. In the middle, in a landscape between reality and fiction, a group of women try to free themselves from the bonds of the known, and cross frontiers using their intuition and instinct. When they come together, the inner cry they share is amplified, it grows until overflowing, and they celebrate it with rituals, offerings, hypnotic songs, and dances. They enter an unknown and bewildering state, a state that frees their minds but at the same time reminds them of their human condition.

Marcos Morau is one of the very few directors able to take us on a trip to a surreal universe full of theatricality, visionary originality, and fantastic frescoes that evoke cinematographic, literary, and pictorial climaxes. The surrealism of Luis Buñuel, the dream world of this subversive and iconoclastic filmmaker, has inspired this new piece, a continuation, in some ways, of his previous piece entitled Le Surréalisme au service de la Revolution – also about Buñuel, and created in 2017, for the CNN-Ballet de Lorraine; Sonoma incorporates the presence of drums from Aragón and an enormous cross on stage. A woman is nailed to this cross, raised and later removed. And around the cross, lying on the ground, there are nine performers busy untying the ropes tied to her, while reciting a long litany of Beatitudes that start from the evangelical Beatitudes. Meanwhile, the beating of the drums, instruments of Buñuel’s indigenous folklore, whose roar is associated with the scream that comes from deep within the entrails, will close the show with the women furiously busy beating them, each one their own, fastened around their necks like weapons on warriors willing to face life, to fight.

The performance SONOMA by La Veronal is presented at the 28th Kalamata Dance Festival with the support of the Embassy of Spain in Athens and the Cervantes Institute.

In collaboration with Graner – Fàbriques de Creació and Teatre L’Artesà

Trained in Barcelona, Valencia and New York in photography, movement and theatre, Marcos Morau (Valencia, 1982) builds imaginary worlds and landscapes where movement and image meet and engulf each other. For more than ten years, Marcos has led La Veronal as a director, choreographer and designer for sets, costumes, and lighting. He has travelled the world presenting his works at festivals, theatres, and various international contexts such as the Théâtre National de Chaillot in Paris, the Biennale di Venezia, Festival d’Avignon, Tanz Im August in Berlin, the Roma Europa Festival, the SIDance Festival in Seoul and Sadler’s Wells in London, among many others. In addition to his work with La Veronal, Marcos Morau has worked as visiting artist for various companies and theatres around the world where he develops new creations, always halfway between the performing arts and dance: GöteborgsOperans Danskompani, Ballet du Rhin, the Royal Danish Ballet, Scapino Ballet Rotterdam, Carte Blanche, Ballet de Lorraine, Compañía Nacional de Danza and the Tanz Luzerner Theater among others.Marcos Morau was also awarded the FAD Sebastià Gasch prize, awarded by the FAD Foundation for Arts and Design, and the TimeOut prize for the best creator, among other awards. With his creations, he has managed to win prizes in numerous national and international choreographic competitions such as the Hannover International Choreographic Competition, the Copenhagen Choreographic Competition, the Madrid Choreography Competition and the Masdanza International Contemporary Dance Festival of the Canary Islands. In addition to his creative side, Marcos Morau also teaches; he combines his creations with training and gives classes and workshops on creative processes and new dramaturgies in conservatories, further education courses and universities, and at the Institut del Teatre, the University of the Arts of Strasbourg and the Sorbonne Nouvelle in Paris.

We who learned to master fire.

The ruins of Antiquity.

The burning of the Library of Alexandria.

The Sword of Damocles.

We are the pollen that feeds the world.

We who see the world from above.

We who gave birth to the world.

Who are the eclipse and its shadow.

The cabin in the middle of the forest.

We are those who did what was necessary.

Who strayed from the path.

Who knew the way to the valley.

Who retrieved the basket from the river.

And we sleep on the highest mountains.

We are awake when you sleep.

We get up when the sun rises.

We understand the direction of the wind.

We are guardians of the relics.

We have only just arrived and are feeling vigorous.

We who do not look back.

Who remember everything that has happened.

Our hand that holds the knife does not shake.

We sit in the shade of the tree.

We who have an antidote for poison.

We who jump off rooftops.

We swim until no-one can see us.

We will bring the dead back to life.

We die old and alone.

We are the exception and the rule.

We who threw the first stone.

Who turned water into wine.

Who took the last dinosaur.

We who guide the rhythm of the winds,

Who move the earth with the rage of drums.

Who rotate around the Sun together with the planets.

We are meat, sex, and money.

We who burned Rome and destroyed Pompeii.

The keys to every door.

Your last hour of life.