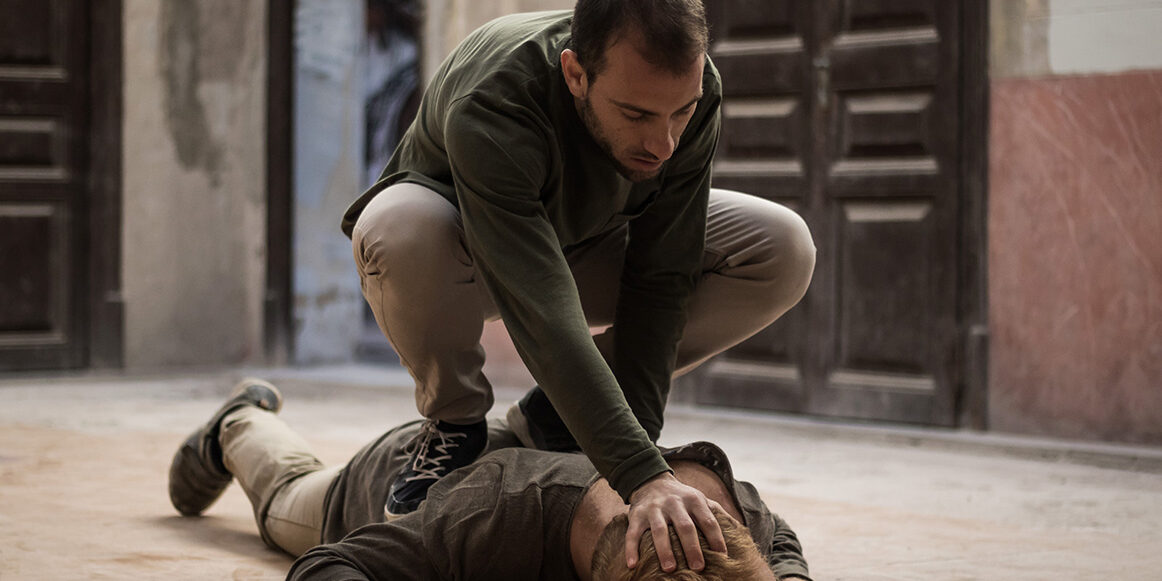 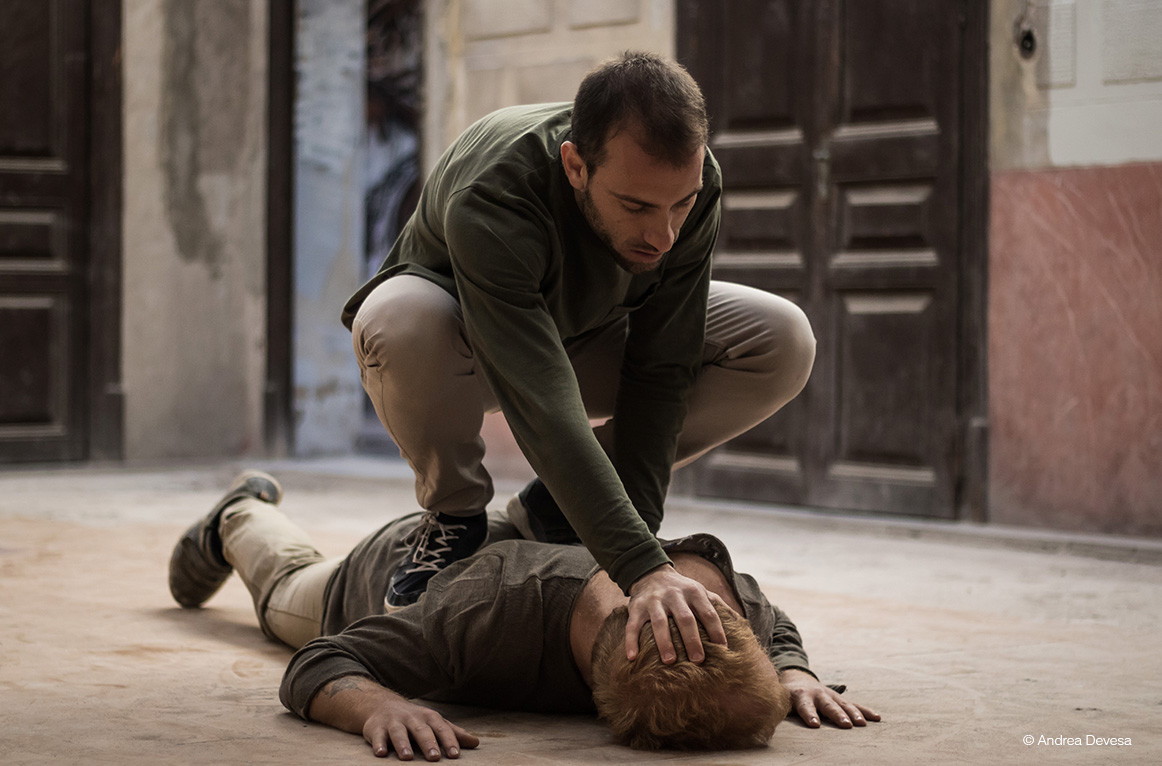 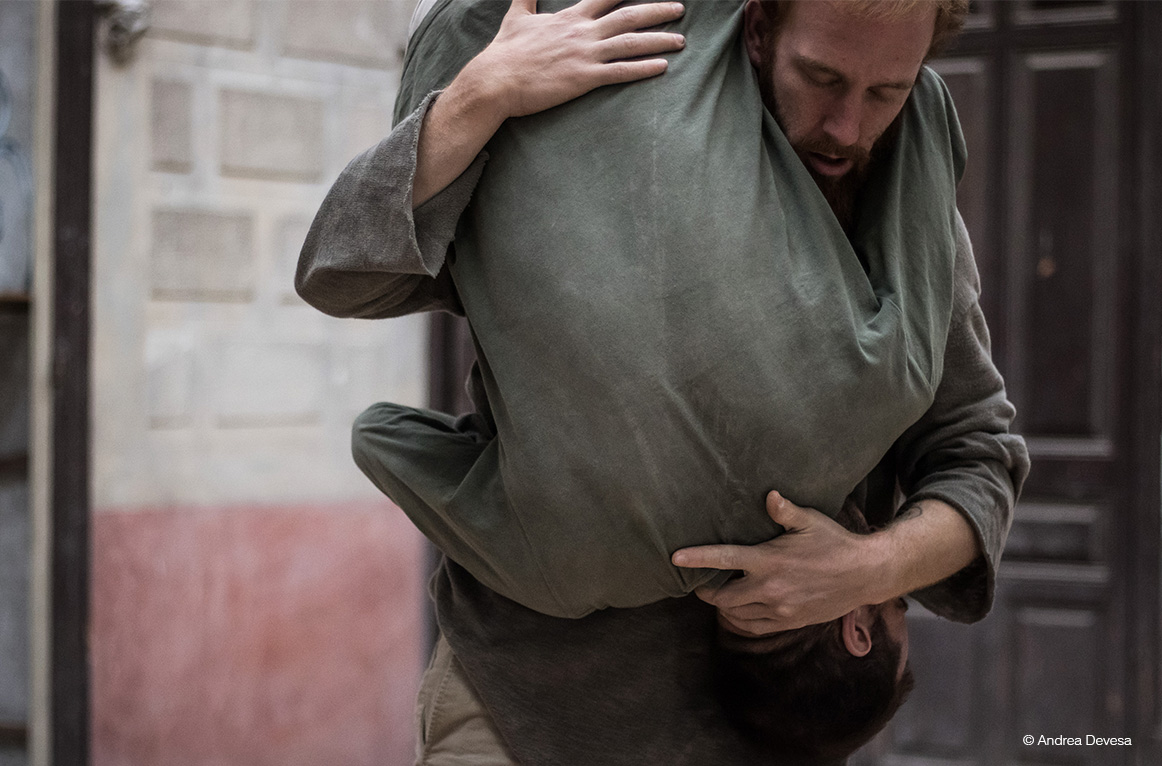 When we feel the need to be free of what keeps us back the opportunity appears. On the other side of the door we find a monster: a shadow that follows us, plays with our fears, impedes transformation. We must face it and make a decision: do we go our own way or do we submit? Either way, we must leave our comfort zone and accept uncertainty.

Diego Sinniger’s LIOV is a reflection on the struggle within us when we need to let go of what oppresses us and keep moving forward in life with integrity and freedom. It shows how our internal conflicts are also focused on our relationships and exposes the thin line that can exist between love and violence, between victim and aggressor, between desire and abuse.

In LIOV, two characters—who can also be interpreted as a single individual—face each other on stage. One decides to rebel against his wounds and fears. He must break free of his mask, which weighs him down intolerably. To do so he needs to hit bottom. Only after that final surrender he will be able to discover that his greatest strength rests in the love of oneself and in the tenderness and compassion towards others.

The performance Liov will be presented at Costa Navarino on 16 July 2021, day of the premiere of the 27th Kalamata Dance Festival, as part of the Festival’s collaboration with the Captain Vassilis and Carmen Konstantakopoulos Foundation, which aims to promote Messenia’s cultural heritage and contemporary cultural creation to international visitors.

The performance Liov by Diego Sinniger is presented at 27th the Kalamata International Dance Festival with the support of Acción Cultural Española (AC/E) through the Programme for the Internationalisation of Spanish Culture (PICE), in the framework of the Mobility grants, as well as the Embassy of Spain in Athens and the Cervantes Institute.

Passionate about any artistic expression that expands the individual’s sensitivity, Diego Sinniger calls himself an ‘artist without label’. His style, as choreographer and dancer, developed from a technique which he calls ‘muscular consciousness’ and is influenced by various practices, such as contemporary dance, hip hop, circus, and martial arts. He began by training in urban dance, mainly in Spain and New York, and has worked in national and international projects, such as Brodas Bros, Uniq, Dblock, and Base de Bases, among others. He also trained in contemporary dance in Spain, France, Brussels, and Germany, attending seminars by choreographers Wim Vandekeybus, Elena Fokina, Peter Jasko, Anton Laschky, Jordi Cortés, Laura Aris, and Francisco Cordoba, and festivals, such as Varium (Barcelona), Cobosmika Seeds (Palamos), Festival Deltebre Dansa, etc. As a performer and choreographer he has collaborated in DIsCOnneCt, LIOV, and paH. During the last five years he worked with various companies, such as Lali Ayguadé Company (U an Mi, Kokoro, saBa), Roser Lopez Espinosa (Noviembre), Ziomara Hormaetxe (Biopiracy), and Cia. Cobosmika (O.t.a., scRakeja’t), among others. He is currently interested in theater and different methods of interpretation, such as the Stanislavsky and Lecoq methods.