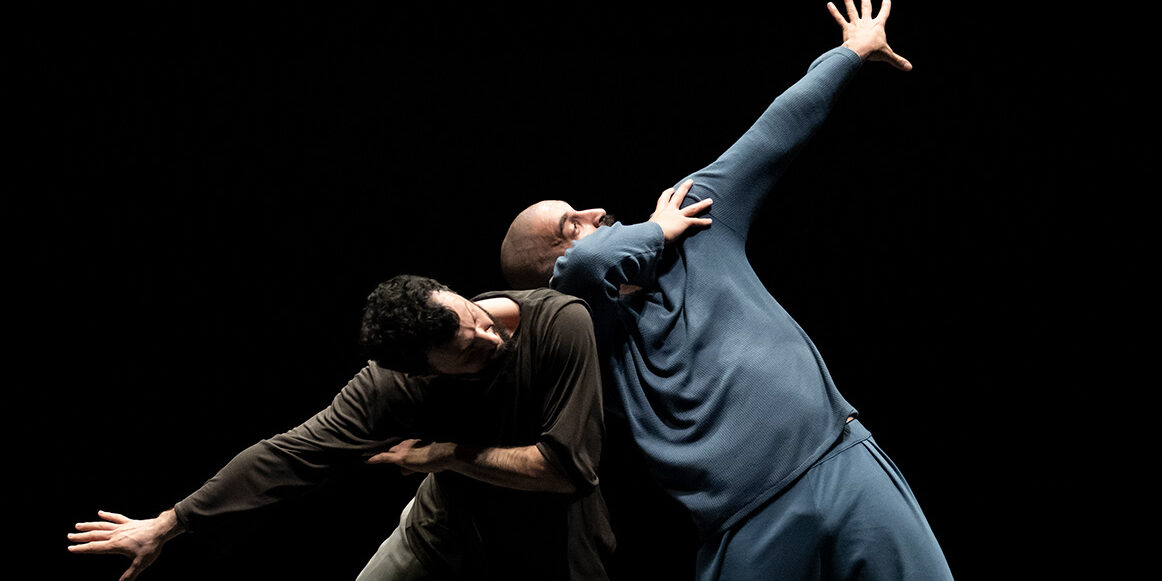 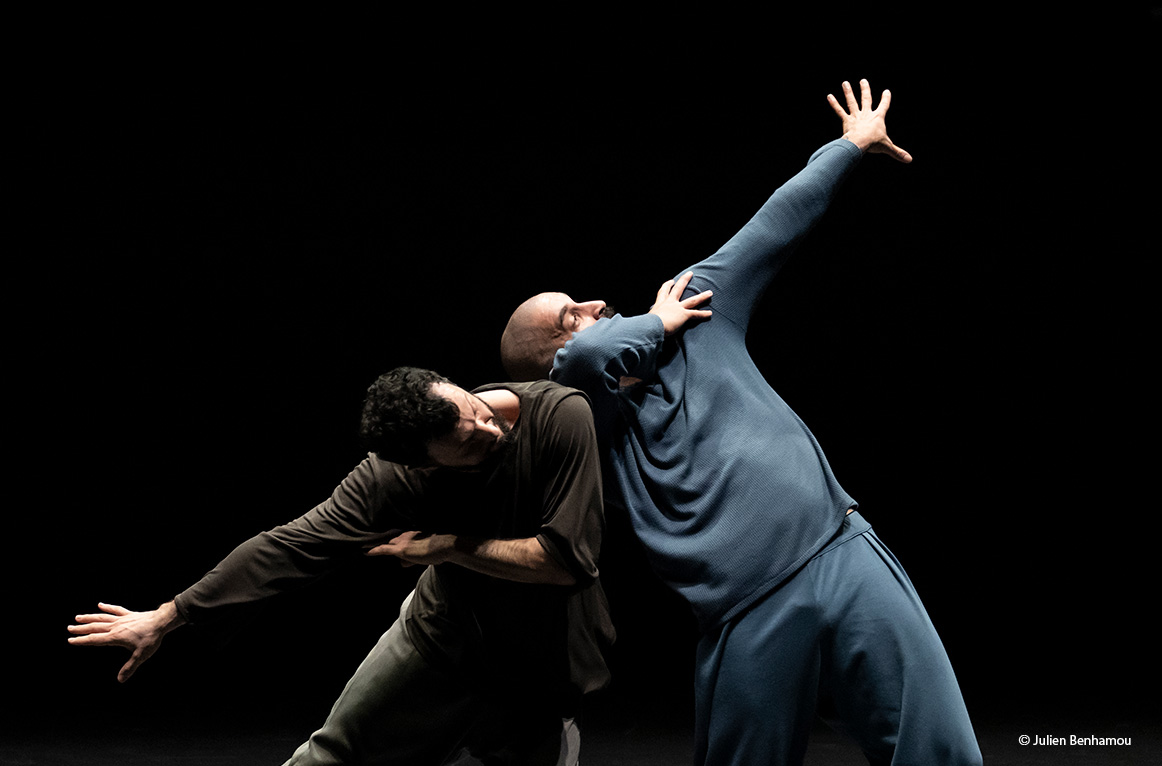 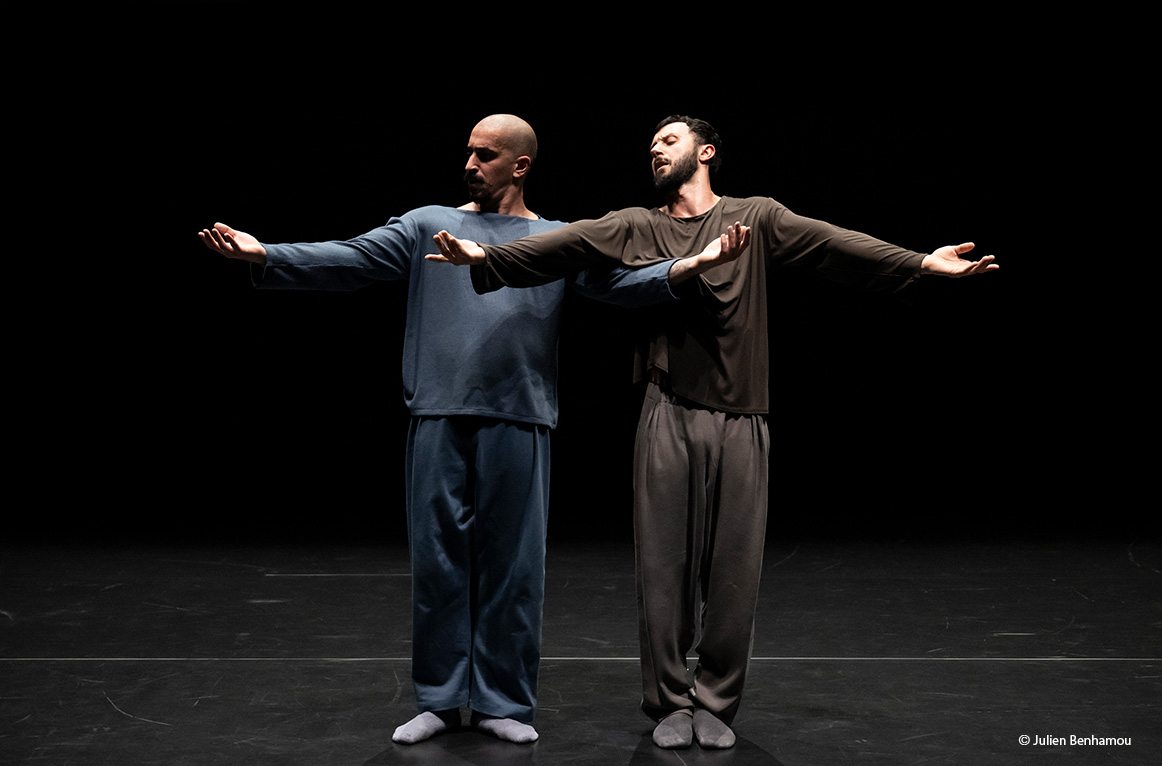 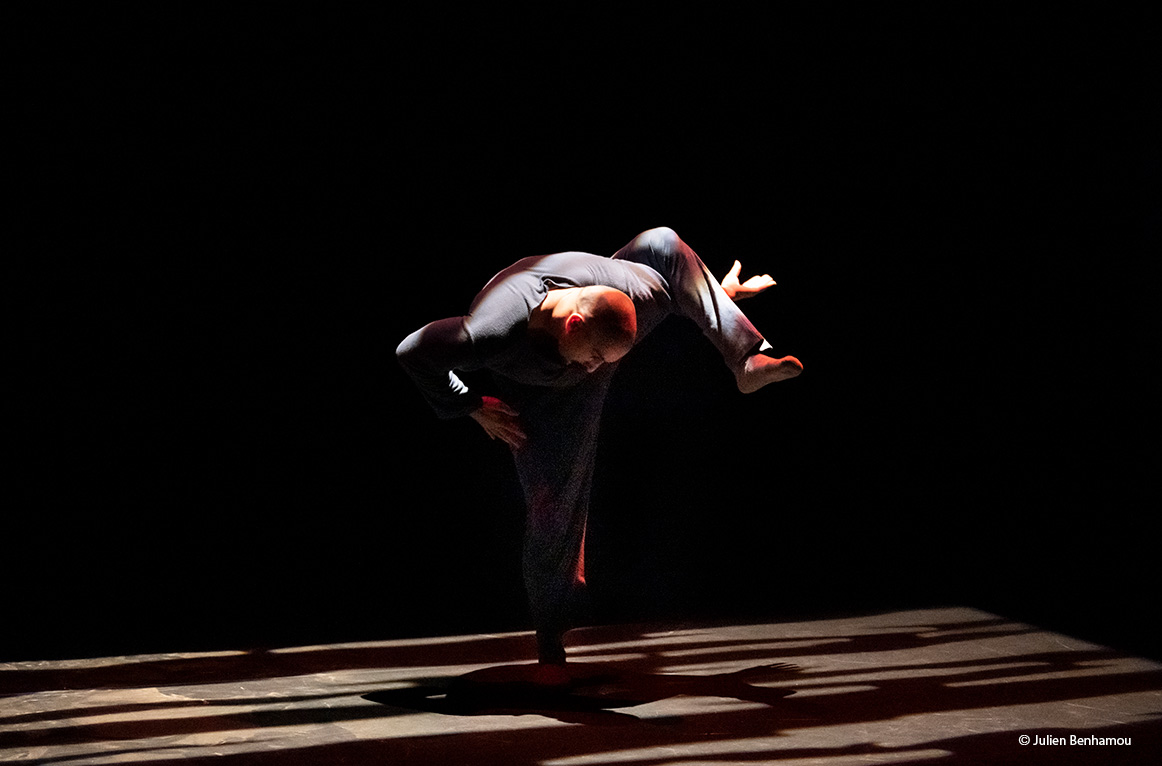 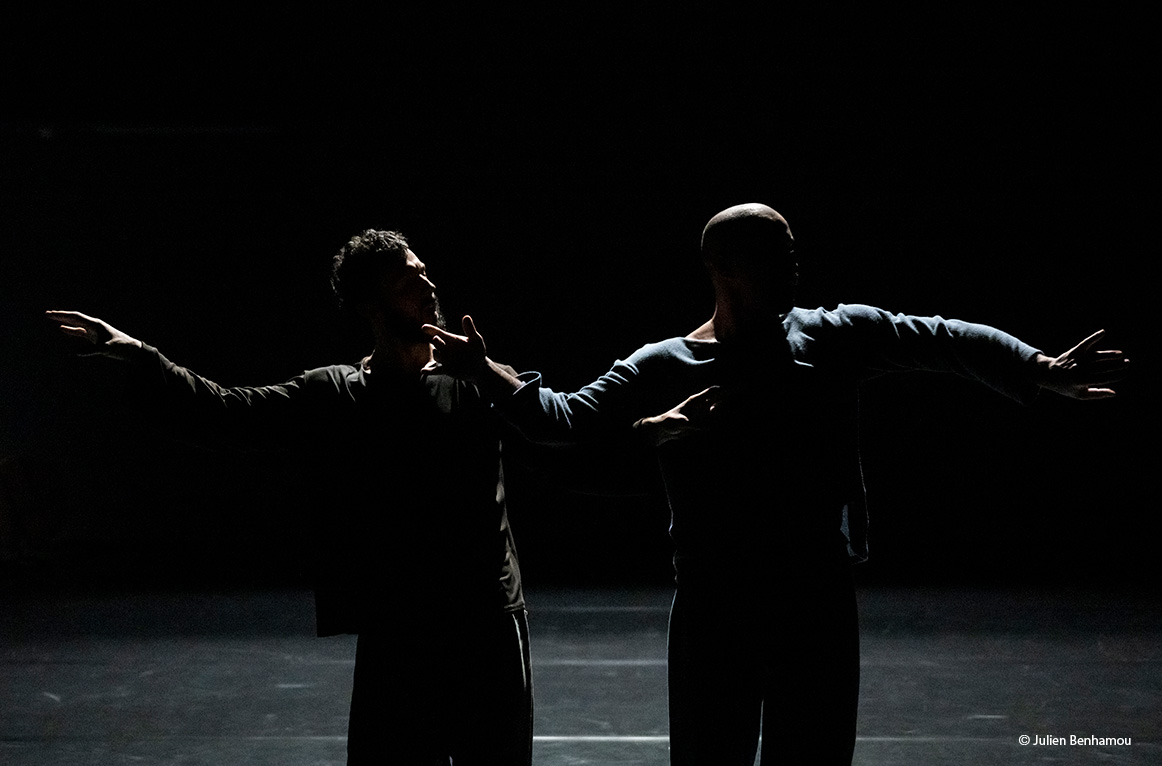 Neighbours, the first international co-production by the Kalamata International Dance Festival in collaboration with Sadler’s Wells, one of the most important contemporary dance organizations in the world, is a multifaceted, dynamic partnership between three eminent artists, Rauf “RubberLegz” Yasit, Brigel Gjoka, and Ruşan Filiztek, each of whom represents a unique cultural heritage.

Pioneering abstract b-boy Rauf “RubberLegz” Yasit and established contemporary dancer Brigel Gjoka were inspired by their time on William Forsythe’s A Quiet Evening of Dance. Both at the cutting edge of their disciplines, they’ve created a work that brings together their diverse expertise and draws influence from their Kurdish and Albanian roots.

Together with live music from composer Ruşan Filiztek, a new choreographic language forms as they examine moments of transformation and contemplation at the crossroads of urban, classical and contemporary dance. Through their shared experience a simple truth emerges; that dance is part of being human.

For a piece that opens in silence, Neighbours is – unexpectedly, ebulliently – chatty. Elbows exchange fireside stories, joust and frolic. Arms intertwine, rebutting, remembering, rejoicing. Knees and hips angle and unfold into intricate, unspoken patterns. Generations of memory surface in the graze of fingers on a shoulder.

Inspired by a suggestion from William Forsythe during the making of A Quiet Evening of Dance, Brigel Gjoka & Rauf Yasit began improvising kinetic patterns together. They delve into the overlap of movement languages inherited through folk dances and communal celebrations, Albanian for one, Kurdish for the other. They explore how these histories pivot through the distinct experiences of each – specifically, ballet and contemporary dance for Brigel; b-breaking, improvisation, design & animation for Rauf – only to intersect, to transform when they meet. For dance, they remind us, is not a product: it is part of human nature. Where there is dance, there is joy. And it is blessedly infectious.

with the support of Dance Reflections by Van Cleef & Arpels

Created in collaboration with William Forsythe

“If you could pick up a dance piece, turn it inside out and look at the label, the words ‘Made at Sadler’s Wells’ would be a guarantee of quality. Since 2005, the north London theatre has been a hotbed of dance creativity, commissioning and supporting some of the world’s finest choreographers to make work.”

Sadler’s Wells is a world-leading creative organisation based in London committed to the making of dance, with over three centuries of theatrical heritage. Since 2005, Sadler’s Wells has created award-winning dance productions, co-productions and touring projects in collaboration with its portfolio of Associate Artists, as well as international dance companies and partners. These include Russell Maliphant’s multi award-winning production PUSH with Sylvie Guillem; Crystal Pite’s Polaris with Thomas Adès; Gravity Fatigue, directed by fashion designer Hussein Chalayan; Sutra by Sidi Larbi Cherkaoui and sculptor Antony Gormley; Michael Keegan-Dolan’s Swan Lake / Loch na hEala; productions by Carlos Acosta’s company Acosta Danza; Natalia Osipova’s Pure Dance; Botis Seva’s Olivier Award-winning BLKDOG and William Forsythe’s A Quiet Evening of Dance. Sadler’s Wells plays a significant role in the development of dance, bringing innovative and inspiring works to worldwide audiences. In the last 15 years, it has created 56 productions that have been enjoyed by over 2.2 million people in 48 countries. Sadler’s Wells productions have toured to some of the most prestigious theatres and festivals around the world, such as the Sydney Opera House, the Lincoln Center’s White Light Festival in New York, the National Centre for Performing Arts in Beijing, the Chekhov International Theatre Festival in Moscow and the Santiago a Mil Festival in Chile. In 2020, Sadler’s Wells premiered Message in a Bottle, a Sadler’s Wells and Universal Music UK production by Kate Prince, based on the songs of Sting. In 2021, The Rite of Spring / common ground[s] received its world premiere, in partnership with the Pina Bausch Foundation and Ecole des Sables.

Rauf “RubberLegz” Yasit is a Los Angeles-based dancer, choreographer, director and visual artist with Kurdish roots who was born and raised in Celle, Germany. He has worked with William Forsythe, the National Opera of Paris, USC, CalArts, LACMA, Nike RT, Burberry, Arashi, Puma, Sadler’s Wells, Flying Steps, CNDC Angers, Red Bull, Muscle Milk, Moderat, Sony, Sonos, Feat, WAD MAG, Tumi, HP, Pandora, Pfadfinderei, Art Factory International, Bodytraffic and more. Rauf “RubberLegz” Yasit has a style that defies categorisation; he has created his own unique movement language and has developed it over a number of years. Rauf “RubberLegz” Yasit is a multi-disciplined tour de force. He received his diploma in 3D Vizualisation and Animation in Switzerland and has years of experience  working in professional design agencies as a visual artist.

Brigel Gjoka is a choreographer, teacher and professional stage dancer. He was born in Albania and trained at the Tirana Ballet School between 1997 and 2004.

In 2006 he was engaged by the Ballet de l’ Opéra National du Rhin, where he had the opportunity to perform different roles and work with choreographers from the international dance scene. He has also joined the Nederlands Dans Theatre and the Forsythe Company. In 2015, he was part of Life in Progress, the farewell world tour of Sylvie Guillem, traveling and performing Forsythe’s DUO2015 around the world. For this production, with Riley Watts, he was awarded the Leonide Massine Prize for contemporary dancer of the year, at the Positano Premia la Danza, in Italy. Brigel has choreographed Evo-Revolution for the Cannes Jeune Ballet (2009); the installation Front to Confront with the Leggere Strutture Company, SWTH for Maggio Danza Italy and RECRECiT for the Kwang Tung Dance Company Malaysia (2013), SYNC with Hector Solari for Staatstheater Passau and BMW (2013), Eksod with Leggere Strutture Italy (2014), for the National Academy of Performing Arts Karachi, Among Fog (2015), and Hotel Propaganda (2017), and DELEGATET for the Theater Vorpommern Germany (2016). Since January 2014, Brigel has been the artistic director of the Art Factory International Bologna. Since 2015, he has been the artistic curator of the Albanian Institute, New York and a correspondent of the Institute in Berlin, Germany. As a lecturer and teacher, Gjoka has worked in Italy, Switzerland, France, China, Denmark, Greece, Albania, Germany, Malaysia, China, Singapore, Australia, and Japan.

Ruşan Filiztek is a contemporary and traditional composer, musician and singer from Istanbul, currently living in Paris, France. Ruşan moved to Paris in 2015 to complete a masters degree in musicology at the Sorbonne University, where he now teaches Balkan and Oriental music and is completing his Ph.D. A specialist in songs and melodies from Anatolia and Mesopotamia, Ruşan spent several years travelling to research and deepen his knowledge of music from a broad range of backgrounds. While spending time in the Middle East, Caucasia, Siberia and Asia he forged bonds with local musicians who have helped him to enrich his repertoire. He has performed with the Paris Philharmonie, and collaborated with renowned musicians Kaboul Bamako on an album, Jordi Savall on his project Orpheus XXI and Gabriel Kerdonkuff. He has also composed for film, working on Diam with French film director Tony Gatlif in 2016. In 2020 he signed with Accords Croisés, releasing his first solo album Sans Souci in 2021. He is currently preparing his next record.