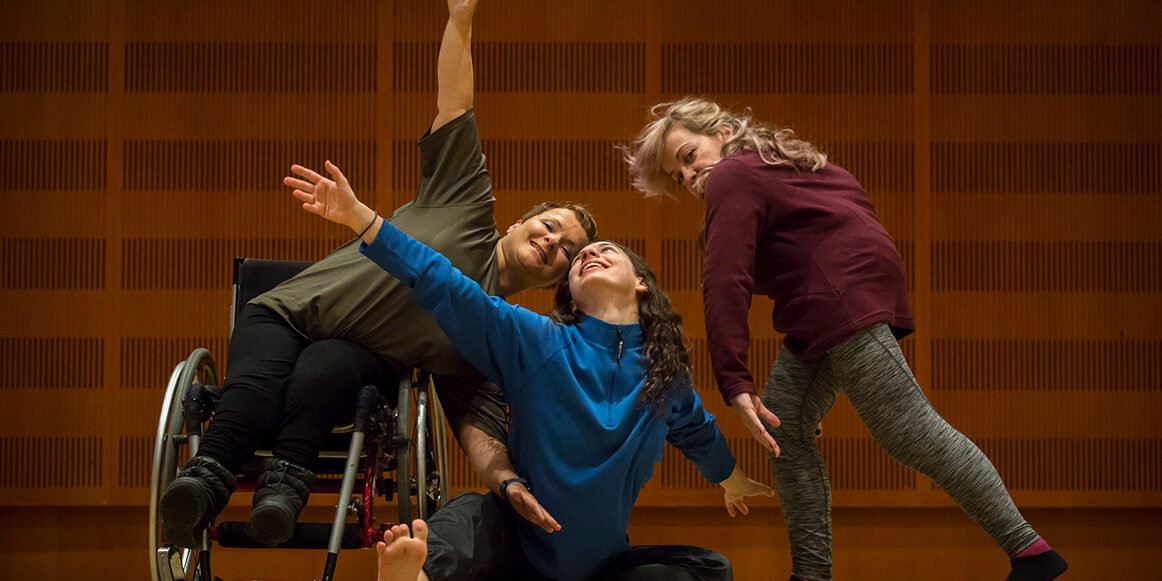 DANCE WORKSHOP FOR PEOPLE WITH DISABILITIES 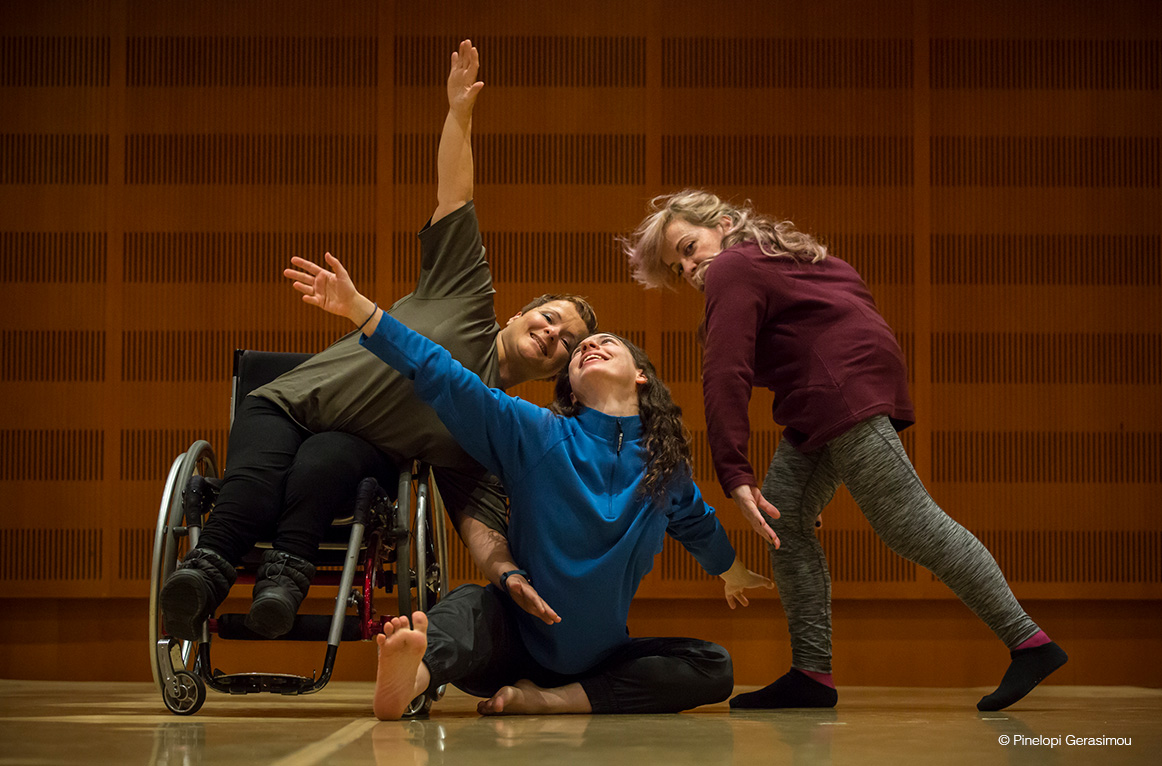 Choreographer Venetsiana Kalampaliki and dancers Irini Kourouvani and Vivi Christodoulopoulou coordinate a kinetic creation and expression workshop for people with or without disabilities, with or without previous dance experience. The workshop encourages participants to delve into their personal movement and interact with space, time, and others. Participants prepare their bodies with a good warm-up and then, through improvisation exercises and group games, explore the space inside and outside of their bodies. They experiment with rhythm, repetition, pauses, and coordination, focusing on properties that enhance their presence in the here and now. They work individually and as a team, giving each and every one the room to create a personal kinetic vocabulary that will lead to the development of a physical dialogue with the team. The workshop explores the environment we shape with our bodies and the communication codes we need to activate in order to function as a team. Wanting to share part of the process followed for the creation of their performance titled Re-call, the workshop’s coordinators draw from their choreographic research and composition by turning their attention to movement and the spaces created by the body.

In collaboration with the Onassis Stegi and the Centre of Physical Medicine and Rehabilitation of Kalamata.

Venetsiana Kalampaliki is a performance artist and choreographer based in Athens. She is a graduate of the Greek National School of Dance and the University of Athens (School of Economics and Political Sciences). She explores movement within a performative research structure, which derives from interdisciplinary collaborations and participation in international laboratories, and develops her personal artistic voice in her own creations. Her works include Connotation (BIOS and Festival de Poche, 2016), Dimensions_V (Stavros Niarchos Foundation Cultural Center, 2019), and Sits and Waits to Watch (Megaron Athens Concert Hall, 2019).

Irini Kourouvani holds a degree in Political Science from the University of Athens. In 1992 the Academy of Athens recognized her for her optimistic approach to life despite her disability. She has taken part in seven world championships in four different sports: track (800 m with wheelchair), ballroom dance, weightlifting, and sailing. She participated in the Athens and Epidaurus Festival in 2007 as a member of the Wrong Movement Dance Organization, and in the Kalamata Dance Festival, in the performance Drops of Breath, the first underwater dance piece worldwide, created by Apostolia Papadamaki, Sophie Bulbuyan, and Lia Charaki. She has been teaching inclusive dance workshops as part of the European programmes Unlimited Access and iDance at the Onassis Stegi together with choreographer and dance instructor Medie Megas (2014-7). As a professional dancer, she takes part in performances and international dance workshops. She is also an active sailor athlete.

Paraskevi (Vivi) Christodoulopoulou entered the dance world in 2003 and since then has appeared in several Greek and international festivals while participating in contemporary dance and contact improvisation workshops. She has collaborated with choreographers Natasha Aretha, Konstantinos Michos, Menti Megas, Alexis Fousekis, Maria Koliopoulou, and Venetsiana Kalampaliki, among others. In 2004, she was the only disabled dancer in the opening and closing ceremonies of the Paralympic Games in Athens and became the first Greek finalist athlete to participate in the winter Paralympic Games in Vancouver, Canada in the alpine skiing event in 2010. Since 2015, she has participated in workshops for people with and without disabilities of the Onassis Stegi, in Greece and in other European countries, as part of the European programmes iDance and Europe Beyond Access.